This is an update on Charlie’s story and I would like to thank the people who commented who sent their best wishes for Charlie. He is sending big paw hugs to you all 🙂

Updating on the recovery

Its been relatively smooth sailing with Charlies recovery despite a few things that i’ve noticed which I will be covering in this post.

As of Firday 12th of May Charlie had is stitches removed and his collar taken off and I can say that there has been an instant change in his mood to a more positive mood. He can now scratch and clean himself which I think he was hanging out for 🙂

His appetite is still not the greatest and this is something I really wanted to touch on here because he is usually a little pig when it comes to food and I think other cat owners my testify to this.

No Energy to eat?

Prior to the accident, Charlie would be clammering around my feet for food at pretty much every chance he gets and now he dosnt do that, and as a result he has lost a lot of weight.

With that said, he was never a fat cat to begin with — however I am finding that he only eats properly unless I spoon feed him like a baby, but as soon as he gets some food in his belly he automatically pirks up and would eat a whole bowl.

But if I didnt spoon feed him to begin with he wouldnt eat nor would he announce that was hungry which has been very strange and a little concerning.
I have come home from work with his food bowl still full…

However I am dealing with it by feeding him at common meal times with the rest of the family and it seems to keep him on track. But maybe its still the early stages.  — Would love to know if anyone has seen this in their own cat.

Inside or Outside thats the question?

I am grateful to have had a lot of support on this site from other pet owners, however in the earlier stages I joined a few big cat facebook groups to seek help and I literally got told off by a few people for letting him outside in the first place for this accident to happen….

It seemed kind of snarky and weird, but I was getting many people messaging me saying to “never let him outside again”, which I thought was insane for a cat like Charlie who is accustomed to the outdoors and doing his own little cat things.

Despite these weird and patronizing comments, Charlie is back outside where he is laying in the sun and his mood has dramatically made a huge change for the better.

At first i was apprehensive based on these people’s messages and comments, but i couldn’t think of the fact that he wouldn’t be able to have a truly happy life without doing what he loves – being outside and laying in the sun and playing with his cat friends.

So if you have a cat who is accustomed to the outdoors I would invite you to not be discouraged to let them outside. I think 3 – 4 weeks of recovery time is ideal to let your cat back outside to venture. Obviously don’t do this unless you get clearance from your VET.

But other than that Charlie is making a speedy recovery and things have been really looking up.

Thanks again for reading 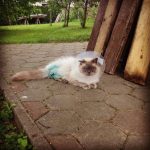 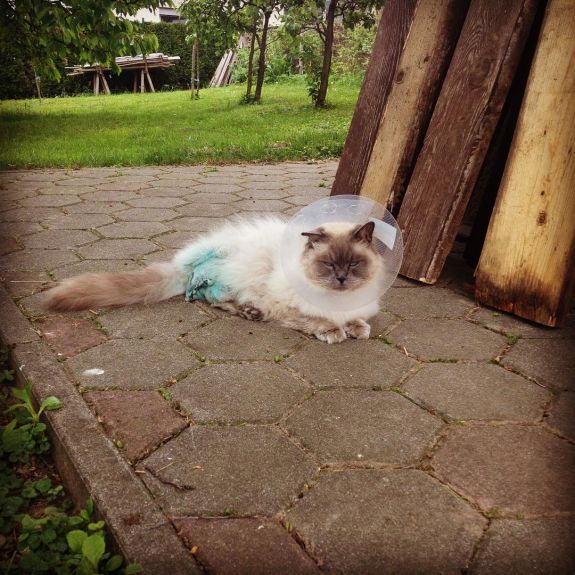 Its been 1 week and 3 days since my ragdoll cat Charlie lost his left hind leg that is still unknown to how and why it happened.

A little back story…

I was woken up one morning to my partner screaming “Charlie lost his leg” and to the sight that was awaiting me was going to turn my life upside down.

His hind leg was completely mangled off where the leg bone had been snapped and no skin or flesh was there, not even his cute paw was there.

We rushed him to the vet and they put him under and amputated immediately. Our cute lil Charlie ragdoll was not officially a tripod and I was just happy to see him alive and have a second chance at life.

We do not know the cause of the accident with his leg, although I have reason to believe that this may of been use to a law mower accident.

I was worried out how things were going to be for Charlie as I have never gone through this ordeal with an animal losing a limb and I had no knowledge of the possible life for him after the operation.

I can happily report that Charlie is doing well and he is showing signs of amazing improvement:

What I have noticed post op thats changed with Charlie.

There are many hacks that I think helped me with administering antibiotics and other aftercare and here they are.

These are my tips for now I will be documenting going forward as time goes on.

About Charlie the Ragdoll

Hi welcome to my blog, my name is Angela Bronson and I would like to share my story about my little Charlie who is a rag doll who lst is leg in a horrific accident.